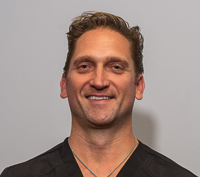 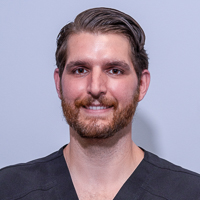 Andrew Grando , PT, DPT, Cert MDT – Andrew completed his undergraduate education with an interdepartmental major in Biology and Psychology at Moravian College. While there, Andrew also focused on his passion for athletics, playing football and achieving All-Conference Honors and the distinction of the title of captain his senior year. After college, Andrew began to develop his career working as an aid at Hands On Physical Therapy, and graduated from Rutgers University in 2014 with his Doctorate of Physical Therapy. Andrew developed a passion for research and education while at Rutgers working as a Gross Anatomy and Neuroscience teaching assistant in addition to serving as a research assistant in the Rivers Lab where he developed and conducted research projects involving mental imagery, virtual reality, and 3D imaging for stroke patients.  During this time he also continued to hone his clinical skills completing affiliations in acute, sports-based outpatient, hospital-based outpatient, and pediatric care. In addition to his core course work, Andrew also focused on community outreach during his time at Rutgers participating in a free physical therapy clinic for members of the Newark community as well as Wellness for Life, an outreach program serving the physical therapy needs of the mentally ill. Andrew obtained his McKenzie Certification in Mechanical Diagnosis & Therapy in 2016 and hopes to become a Diplomat of the McKenzie Method in the near future.

The McKenzie Method of MDT is a reliable assessment process intended for all musculoskeletal problems, including pain in the back, neck and extremities (i.e., shoulder, knee, ankle etc.), as well as issues associated with sciatica, sacroiliac joint pain, arthritis, degenerative disc disease, muscle spasms and intermittent numbness in hands or feet. If you are suffering from any such issues, then a MDT assessment may be right for you!

Developed by world-renowned expert physiotherapist Robin McKenzie in the 1950s, this well-researched, exercise based approach of assessment, diagnosis and treatment uses a comprehensive and clinically reasoned evaluation of patients without the use of expensive diagnostic imaging (e.g. x-rays and MRIs). The treatment principles of the McKenzie Method promote the body’s potential to repair itself and do not involve the use of medication, heat, cold, ultrasound, needles, or surgery. McKenzie allows patients to learn the principles and empowers them to be in control of their own symptom management, which can reduce dependency on medical intervention.

How Does it work?

Most musculoskeletal pain is “mechanical” in origin, which means it is not due to a serious pathology like cancer or infection but a result of abnormal or unusual forces or mechanics occurring in the tissue. Further, it means that a position, movement or activity caused the pain to start. If a mechanical force caused the problem then it is logical that a mechanical force may be part of the solution. The MDT system is designed to identify the mechanical problem and develop a plan to correct or improve the mechanics and thus decrease or eliminate the pain and functional problems.

In the simplest and most common instance, this may mean that moving in one direction may provoke and worsen the pain, and moving in the opposite direction may eliminate the pain and restore function. This is known as Directional Preference. Other patients may have pain just at the end of movement or with certain functional movements like throwing or stair climbing. The McKenzie assessment explores these different positions and movements, how the patient performs them, and the response to these movements. Interpreting this information, the clinician determines which of the movements and posture becomes the treatment as well as the necessary exercise dosage.

How do you know if you are dealing with a certified McKenzie provider?

There are two primary ways to recognize if you are dealing with a qualified McKenzie provider. 1) You will find their name included on our McKenzie Provider List, and 2) the provider will have a certification document from The McKenzie Institute stating the month and year they became certified and signed by a branch official. Many display the certificate in their office. You can always verify their active certification status with the local McKenzie Institute branch office.

We're currently offline. Send us an email and we'll get back to you, asap.